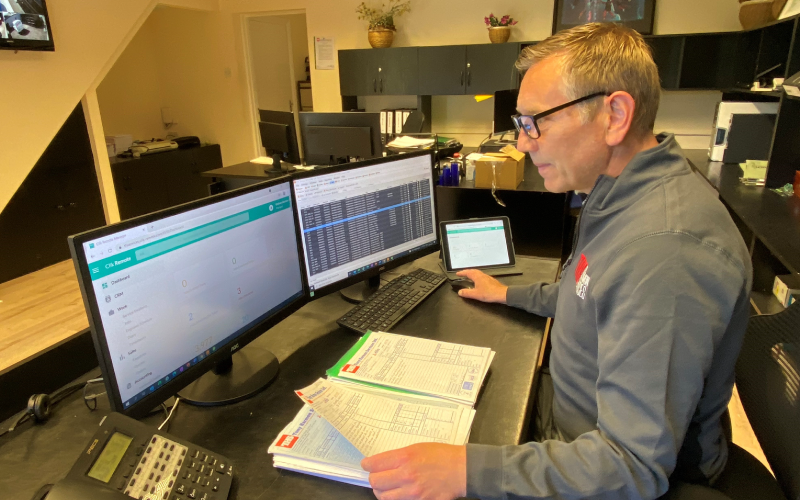 “We are aware of peaks in requirements across our different engineers in the field, which helps the business hugely. Admin time spent processing paperwork has been reduced considerably. Engineers have a lot more freedom to schedule their calls and work”

No matter how much progress Graham Harmon or his team had made the previous day, they started every new working day rechecking their assigned jobs. “We had to double-check our paperwork every morning. Before sending the engineers out onsite to ensure there were no errors and they had everything they needed to get their work completed,” he says.

Graham is responsible for overseeing projects from start to finish. Including quotes, tracking purchases and communicating with engineers for some huge customers including Selfridges, Brown Thomas, Dublin Bus and Dublin Airport Authority. “My scope spans managing staff, accounts, scheduling engineers, contracts to client meetings” he explains, “which means that on any given day I’ll work with 20 or 30 different people, all on different teams”.

“We cover domestic and commercial properties, from maintenance to large industrial installations. Each job is different and requires a team of skilled engineers, all requiring top-notch organisation and efficiency to ensure the job is completed on time. Our customers, from the initial quote to completion of the job, whether domestic or commercial, expect the same level of service”.

“We were finding it tricky to keep track of purchases, the daily emergency callouts and assigning jobs was becoming hard work” he says.

“Before we used Clik Service and Clik Remote, an engineer in the field would be relying on paper job sheets. If these were incorrect, or the paperwork was lost, it could extend the completion date of the job by days, meaning more expense and an unhappy client” says Graham.

“Harmon Air is a similar company to us and also based in Dublin. They were already set up using Clik Service and Clik Remote, they recommended Clik and suggested we gave it a try ourselves”.

“After talking through our headaches as our workload increased and how we could improve our processes, we purchased Clik Service and Clik Remote. Clik Remote allowed us to see where our engineers jobs were so we could quickly assign the nearest engineers to emergency callouts”.

“The team at Clik had us set up very quickly, the support team is terrific; we are very impressed. We are only six months into using the software, but we can now answer customers immediately when they are looking for daily job updates”, says Graham.

“The company as a whole is much more connected; we are engaged with our customers and engineers, and everything seamlessly links together. My family are happy too, as when I’m at home; I’m not thinking about the following day or talking about work all night!”.